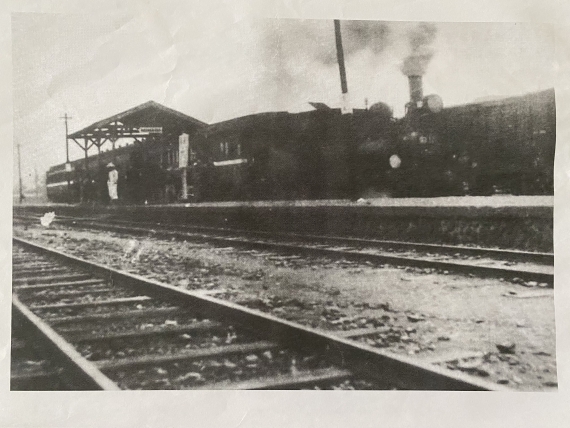 Wan-Xin Railway, which served the Xindian railroad branch line that traveled westward, ran from Wanhua to Xindian. It was constructed in 1921 (the 10th year of the Taisho era) by Taihoku Railway Company, which operated with private capital. Known as Taihoku Railway at the time, this railway started off from Wanhua Railway Station, traveling along Sections 1 to 3 of Tingzhou Road, crossing Keelung Road and going straight from Alley 23 of Section 4 of Tingzhou Road, entering the end of Alley 150 of Section 5 of Roosevelt Road in front of the present-day Gongguan Campus of National Taiwan Normal University and leaving from the head of the alley, and moving along Roosevelt Road to reach Xindian. The railway originally measured 10.4 km in length; in 1931, it was extended by 300 m to 10.7 km to serve the County Office in Xindian.

During the Japanese colonial period, the railway stopped at 16 stations: Kuchaing (a freight station), Babacho, Hotarubashi, Koteicho, Senkobyo, Suigenchi, Kokan, Jyugofun, Seibinkaisha-mae, Keibi, Ershizhang, Taihei Kogakko-mae, Taiheirin, Shichichori, Shinten, and Gunyakusho-mae. After World War II, the railway was operated by Taiwan Railways Administration (TRA) as a public business. Now it served 11 stations: Kuchaing (a freight station), Hoping (formerly “Babacho”), Yingchiao, Kuting (formerly “Koteicho”), Shuiyuan Ti, Kungkuan, Wanlung (renamed from “Jyugofu” in 1955), Chingmei (formerly “Keibei”), Ta Pinglin, Chichang, and Hsintien. The railway provided the main means of transportation to travel from Wenshan and Xindian, and it was frequently used by people in Taipei to visit Bitan until the 1960s. However, as road transportation infrastructures and coal production plunged, TRA could no longer handle its financial deficits because of the railway. The use of the railway also led to national defense concerns. As a result, it was decommissioned in 1965, officially ending its 44-year service. All the stations it served and its rail tracks were immediately removed. The scenes of trains running in Jingmei are only left in the memory of local elders.

A major station of Wan-Xin Railway,Jingmei Railway Station was located at the junction of Section 6 of Roosevelt Road and Cheqian Road. It was a wooden bungalow with two platforms and six tracks. On the front left and right of the station was a facility where coal deposits delivered by push cars from Shiding, Shenkeng, and Muzha were stored. Right in front of the station was Cheqian Road, which measured 83.3 m in length, making it the shortest road in Taipei at the time. At the junction of the right of Cheqian Road’s end and Jingwen Street was formerly the Jingmei Highway Bureau and Bus Terminal.

Jyugofu Railway Station was a simple station of Wan-Xin Railway that had no ticket booths. It was renamed “Wanlung” in 1955. The station lay in front of today’s Wanmei Building at the intersection of the old path of Jinglong Street and Sections 5 and 6 of Roosevelt Road. Wanmei Building was where a coal storage facility once operated and collected coal deposits sent from Yongfeng. Xinyi, and Wanlong mines by push cars traveling along Jinglong Street.