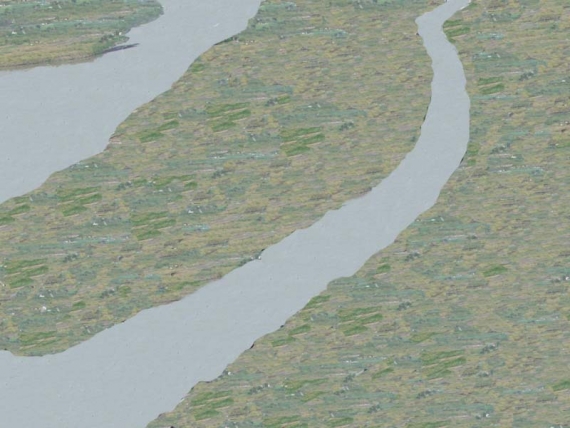 Outside the levees along Jingmei River in Jingmei are three long-strip parks: Jingmei Park (formerly “Jingmei Riverside Park”) in the neighborhood of Yuying Street and Wanqing Street, Wanhe Park No. 1, 2, and 3 near the end of Wanlong Street, and Wannian Park No. 1, 2, and 3 between Wanfu Elementary School and Section 4 of Tingzhou Road. Most parks in Taiwan have a quasi-square shape; few have a shape of a long strip. This makes the three aforementioned parks worth exploring.

On the Taiwan map of 1921, produced during the Japanese colonial period, Jingmei River forms into two diversions when it flows to Beixin Bridge (which crosses Taipei and terminates in Xindian). In the middle of the diversions are two shoals in the vicinity of Xizhikou (around the end of Wanqing Street); one lies before Xizhikou and is called “Dingxizhou” and the other lies close to Dinggonguan (nowadays Gongguan) and is called “Xiaxizhou.” When early settlers traveled to Jingmei via Tamsui River and Xindian River, they went ashore Jingmei River between both shoals and named this place “Xizhikou” (Jingmei River converges into the entrance to Xindian River, hence the name). Levees would then be put up along Jingmei River, which was prone to overflowing and causing a flood. The levees were built to enclose Dingxizhou, with a diversion on its right kept outside of them, and they stood on the left side of Xiaxizhou (some settlers had lived there before the construction), keeping out the shoal and a diversion on its right side. By now, the diversions outside the levees received no river water, and after they dried up, they would be filled with soil, planted with trees, and eventually rebuilt into long-strip parks.

Xiaxizhou had already seen residence before the levees were put up. Today’s Xizhou Street leads to Xiaxizhou, and because its route includes an old channel of Jingmei River, there used to be a bridge halfway. Xiazhizhou is an area of land located between Section 4 of Tingzhou Road and the levees; it spans National Taiwan Normal University’s Gongguan Campus and high-rise buildings constructed from military villages.