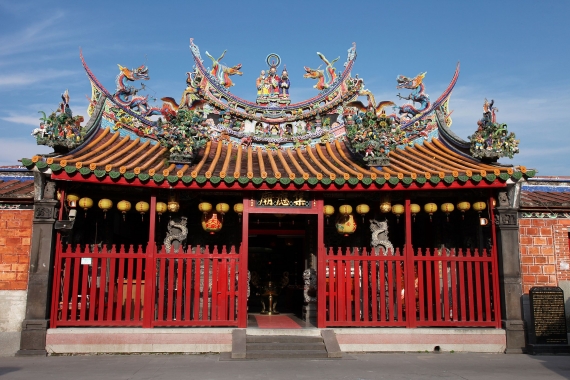 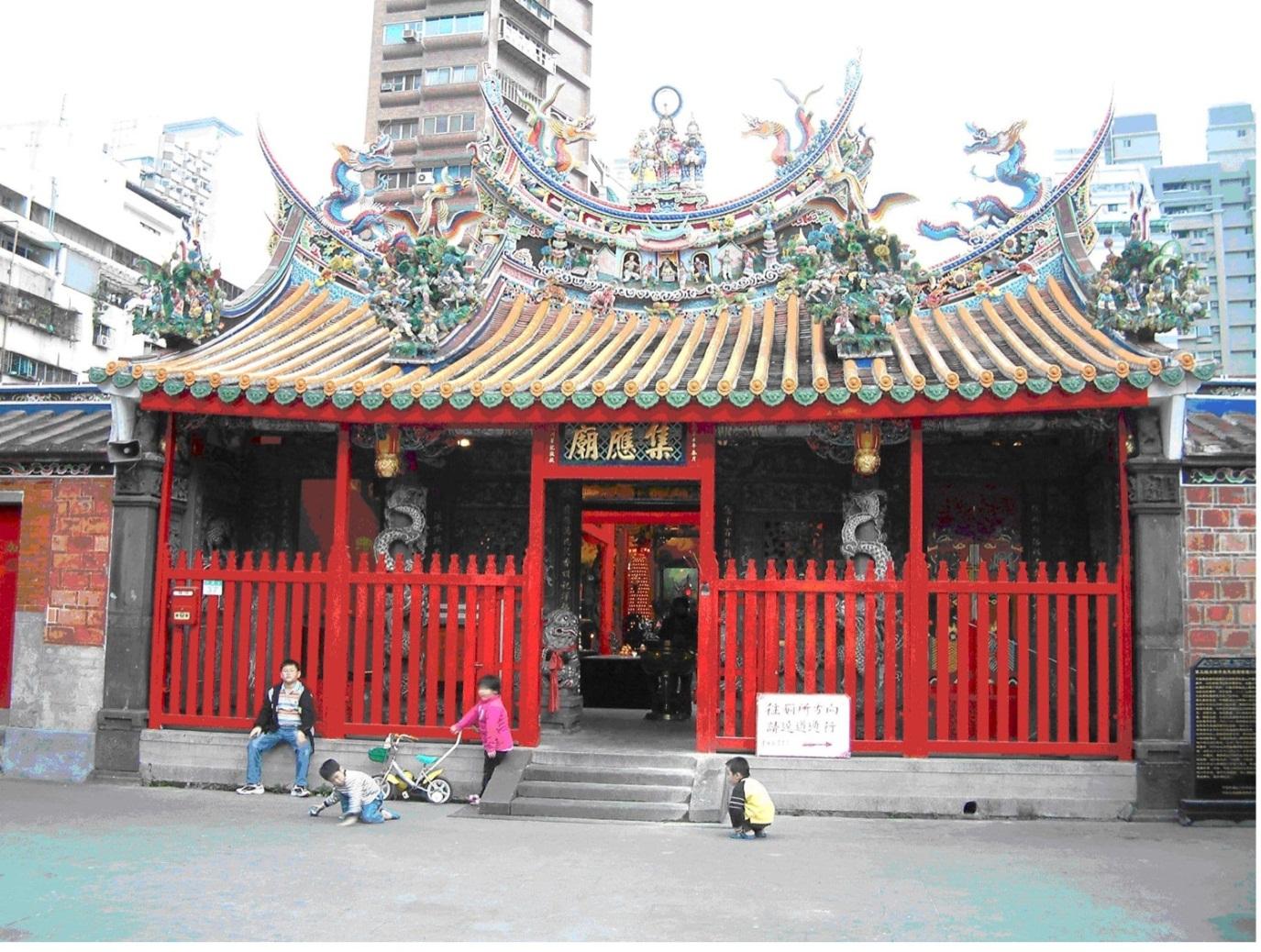 Jiying Temple is located on No. 37 of Jingmei Street and within Jingmei Night Market. It was built within Zhuwei (on the south side of the present-day Jingmei Elementary School) in 1860 (the 10th year of the Xianfeng era) by members of the Gao clan who had emigrated from Anxi County of Quanzhou Prefecture in Fujian Province. In 1867 (the 6th year of the Tongzhi era), the temple was moved to its current location. There are two halls respectively installed at the front and rear of the temple, and corridors on the left and right sides. In 1894 (the 20th year of the Guangxu era), the temple was furnished with the left wing. On the main hall hangs a tablet with the inscription “Dapingshize,” which was crafted by the Gao clan at the time of the temple’s construction

Afterwards, the temple underwent three major renovations, each concluded with wooden or stone tablets as a sign of commemoration that were hung up inside the shrine of worship. The first renovation, which occurred between 1924 and 1926 (the 13th to 15th years of the Taisho era), involved repairing the main hall and adding the right wing to complement the temple’s appearance. The renovation ended with two tablets respectively inscribed “Weizhendongying” and “Nanminyuanfu” and with an epigraph listing donors’ names. The second renovation was conducted between 1959 and 1960, with the Zhongzheng Platform (a performance platform) built on the square in front of the temple. The renovation was wrapped up with three tablets respectively inscribed “Zepulishu,” “Shenlingxianhe,” and “Anbanghuzhong” and with an epigraph listing donors’ names. The temple was renovated a third time between 2003 and 2005, for which a tablet inscribed “Suiyangchuanhui” was crafted and a monument that reads “Renovation of the Third-Grade Historic Site Jingmei Jiying Temple” was erected. The monument, which stands in front of the temple, chronicles the history of the temple and the details of the third renovation and presents a list of donors’ names on its back.

In 1985, the temple was designated as a level 3 national historic site for its historical and cultural significance, as well as proper maintenance.

Jingmei Jiying Temple is dedicated to Revered King Baoyi Zhang Xun, who is popularly known as “Ang-kong” or “Marshal Ang.” Legend has it that Commander Zhang and Governor Xu Yuan sacrificed themselves for protecting the city of Suiyang during the An Lushan Rebellion, and their loyalty was admired so much that a place of worship called “Shuangzhong (Double Loyalty) Temple” was built in their name during the reign of Emperor Suzong of the Tang Dynasty. When upheavals hit Zhongyuan in 880 (the final year of the Tang Dynasty), Gao, Zhang, and Lin clans fled southward from the present-day Huangchuan County of Henan Province while praying for succor from a Revered King Baoyi statue they were carrying with. After the three clans arrived safe and sound in Anxi County of Fujian Province and settled down, they co-built a place of worship for Baoyi to thank Him for protecting them throughout their exodus. They named the temple “Jiying” (where Ji means “together” and Ying means “perceiving”) because they had been guided and protected by Ang-kong during their journey. Since then, Baoyi had been their protector.

In the 1720s (the late phase of the Kangxi era), the three clans, struggling to make ends meet in Anxi, migrated to Taiwan under the wings of Ang-kong. They settled in Jingmei, and so did their protector.

In the 1850s (during the Xiangfeng era), the Gao, Zhang, and Lin clans became well-known settlers in Wenshan and raised a lot of children for manpower, but disagreements would cause them to divide the original Jiying Temple. They would draw lots to decide who should own which objects placed in the temple and build their respective shrines of worship. The Zhangs acquired a ceramic incense burner and constructed a Jiying Temple in Muzha. The Lins obtained the statue of Madam Lin and built a temple in Wanlong to worship her. The Gaos got the status of Revered King Baoyi and built a Jiying temple in Jingmei to worship him. The Jingmei-based Jiying Temple, which shares the same features as folk religion temples in Taiwan, is a heritage site of over 150 years old. The temple boasts two crown jewels that it inherited from its predecessor: a wooden incense burner and the seat for the Revered King.

Revered King Baoyi is worshipped as a protector deity in Jiying Temple. He not only protects the lives and possessions of His believers; He may serve different purposes depending on the circumstances. It is said that the Great Emperor of Jade commended Zhang Xun and Xu Yuan for their loyal deeds by assigning Them to safeguard crop fields and dispel pests from the fields. Thus, in the years when agriculture was the main economic staple of Taiwan, festivals held to “Welcome Ang-Kong” to send blessings to people and livestock and pray for good harvests were highly popular in the vicinity of Tamsui River. The deity also used to protect early settlers psychologically, who sustained the travails of establishing their homes in the Taipei Basin and dealing with disturbances by indigenous people time and again. Thus, the Revered King is not just a God of Warfare; He also protects believers in different contexts.

The lesser god worshipped in Jingmei Jiying Temple is Madam Lin, who was the concubine of Zhang Xun. Lin is briefly mentioned in Volume 192, New History of the Tang: Biography of Loyalty and Righteousness:

The city of Suiyang now suffers from food shortage because it has been ceaselessly surrounded by An–Shi rebels. Many of the soldiers commanded by Zhang Xuan have starved to death. Those that survive are crippled and weak. Zhang brings Madam Lin out to the crowd, announcing that, “All of you soldiers, who are protecting the city, have starved for a long time but still retain your sense of loyalty and righteousness. I am dying to cut off my flesh for you to eat and will not leave you hungry just because I cherish my beloved concubine!” Then he kills Lin, asking his soldiers to share her flesh. They cry loudly at the sight of this, but is ordered by Zhang to eat her.

Because of her sacrifice, Madam Lin is venerated as the Madam of the State of Shen and now deified in Jiying Temple. When the Revered King goes out on his pilgrimage, She always leads the way sitting in a sacred sedan chair—which indicates believers’ strong respect for Her.

Jingmei Jiying temple witnesses how Chinese immigrants from the Qing Dynasty onwards settled in the Taipei Basin and lived their life in the neighborhoods in Xindian and Jingmei Rivers. It is unique because it is a shrine of protector deities built by the Gao clan, who came from Anxi County of Fujian Province, and hosts family-based worship services. As the temple chronicles the experiences of immigrants from Anxi developing Wenshan District, it offers posterity a glimpse into their travails of settling in Taiwan and plays a role in understanding what influence the immigrant-based Taiwanese society has and how it