Landscape of Jingmei before 1960 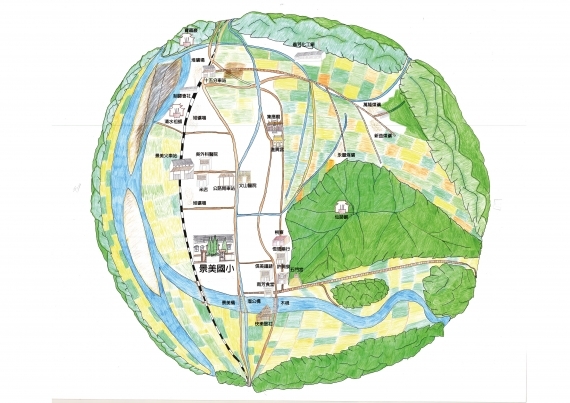 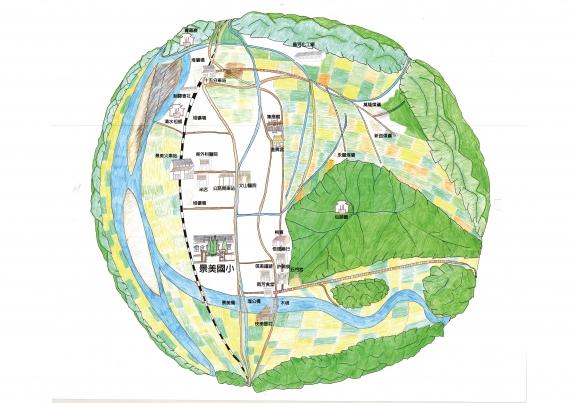 Over this period, Jingmei’s economy depended on agriculture and mining, and its landscape had the following changes:

1. In around 1735 (the 1st year of the Qianlong era), early settlers established communities in Jingemi, starting from Xizikou. Wulixue Canal was built by the Zhou family to irrigate crop fields in western Taipei. The canal distributed water from Jingmei River, transferring it northward to the fields via Jinghou Street

2. In 1761 (the 26th year of the Qianlong era), Kuo Hsi-liu installed a wooden trough bridge above Jingmei River. The Liugongjun canal system stretched northward from Jingmei Street in Xindian, shifting eastward at the foot of Toad Mountain in Gongguan to irrigate crop files in eastern Taipei. Jingmei was originally called “Kingbe,” because it was at the end of the wooden trough bridge.

3. In around 1800 (when Taiwan was under the reign of Emperors Jiaqin and Daoguang of the Qing Dynasty), ferry ports were relocated to the front of Kingbe Street, which then saw business establishments opened.

4. In 1831 (the 11th year of the Daoguang era), Wanqing Qingshui Zushi Temple was built in Xizhikou.

7. In 1899 (the 32nd year of the Meiji era), the construction of roads stretching between Kengbe and Shinko to facilitate traffic in Shinko Prefecture began. It would be completed in 1901.

8. In 1908 (the 41st year of the Meiji era), the Japanese colonial government built the Liugong bridge (the first reinforced-concrete bridge in Taiwan). Culverts were installed beneath the bridge to take over the wooden troughs and distribute water for irrigation. The deck of the bridge was used by pedestrians and vehicles. The aqueducts of Liugongjun were partially re-routed to travel to Jingwen Street. Wulixue Canal in Kengbe was merged into Liugongjin. Push cars traveling from Nanmen to Shinden were unveiled in 1908.

9. In 1909 (the 42nd year of the Meiji era), abandoned channels in Kengbe Street were paved and converted into roads. In addition, the rocky roads leading from Kengbe to Muzha widened and leveled

10. In 1919 (the 8th year of the Taisho era), push-car tracks were installed traveling from Kengbe to Muzha, Shinko, and Sekitei.

11. In 1921 (the 10th year of the Taisho era), the privately owned Taihoku Raily (popularly known as Wan-Xin Railway”, which traveled from Banka to Shinden, began operation. Jyugofun and Keibi stations were first set up in Kengbe, followed by Seibinkaisha-Mae Station. Push cars delivering coal deposits and bound for Jyugofun were also installed.

12. In 1926 (the 1st year of the Showa era), an automobile firm based in Bunsan County started to serve the routes between Kengbe and Muzha (it had operated between Shinden and Daitotei in 1923). That year, Wansheng River, which contributed to droughts during summer and floods during autumn in Xingfu Village, was dredged.

13. In 1927 (the 2nd year of the Showa era), Taihoku Bottle Manufuring Company was founded in Kengbe with an eye to providing job opportunities to local residents.

15. In 1955 (the 44th year of the Republic of China), Jingmei Bridge was built alongside the Liugongjun canal system. A road stretching from Shiwufen to Mamingtan was constructed, and Xinglong Road now led to Muzha Road.

16. Throughout the 1950s, those who immigrated to Taiwan along with the Nationalist government made contributions to Jingmei in different ways. Businesspeople established manufacturing facilities in Jingmei, such as Minsheng Electrochemical Factory. Educators founded educational institutions, such as Hujian High School And Shih Hsin School of Journalism. After the compulsory education policy was introduced, Jingmei Elementary school set up Xinde and Longsheng branches.

此分類更多內容： « The Stealthy Wansheng River Landscape of Jingmei during 1960–1980 »