Muzha Old Street and Landmarks Nearby 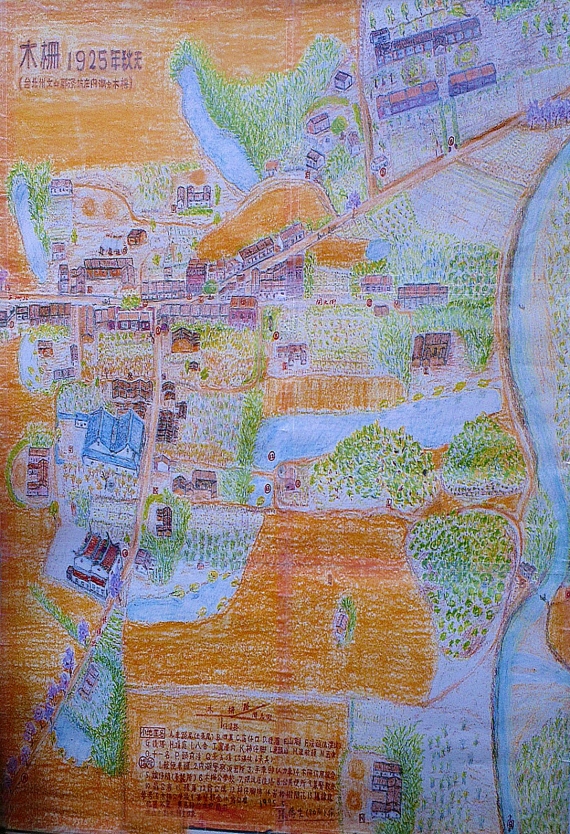 In around 1700 (during the reign of Emperors Kangxi and Qianlong of the Qing Dynasty), immigrants from provinces of Fujian and Guangdong seeking to settle in the Taipei Basin first entered Taiwan from Tamsui and traveled to Tamsui River, Xindian River, and Jingmei River to establish their footholds. By 1745 (an early year of the Qianlong era), they had spread to Muzha, which would be converted into a commercial street in 1800 (during the reign of Emperors Jiaqin and Daoguang of the Qing Dynasty) and served as a midpoint between Shenkeng and Shiding that led to the upstream section of Jingmei River. After World War II, the Muzha Old Street spanned Section 3 of Muzha Road, Baoyi Road, and Section 1 of Zhinan Road; this geographical range can be depicted in a Taiwan map drawn in 1921. 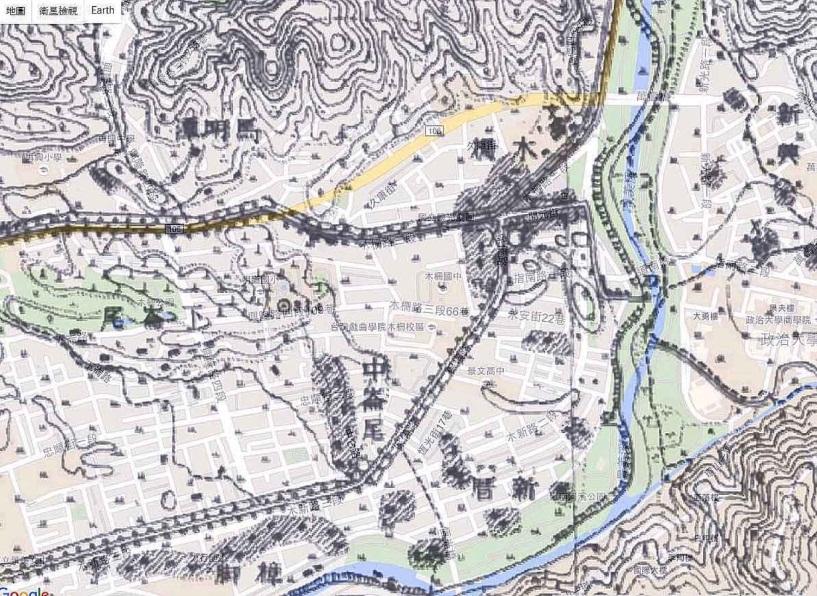 Ringed by mountains on three sides and split by Jingmei in the middle, Muzha has a landscape characterized by long and narrow river-valley plains in the east and west and several small basins. In Southern Min, “hu” refers to a basin within a mountain. Muzha was called “Neihu” between the Qing Dynasty and Japanese Colonial Period; officially, it was called “Neihu Village.”

(2) Monument in Honor of Emperor Taisho: This monument stands on a small hill on the east side of Muzha Elementary School. It was erected to commemorate Japanese Emperor Taisho’s enthronement in November 1915 (the 4th year of the Taisho era), when the emperor finished a three-year wake for his deceased predecessor (a custom at the time) and all manner of celebratory events for this enthronement were held. 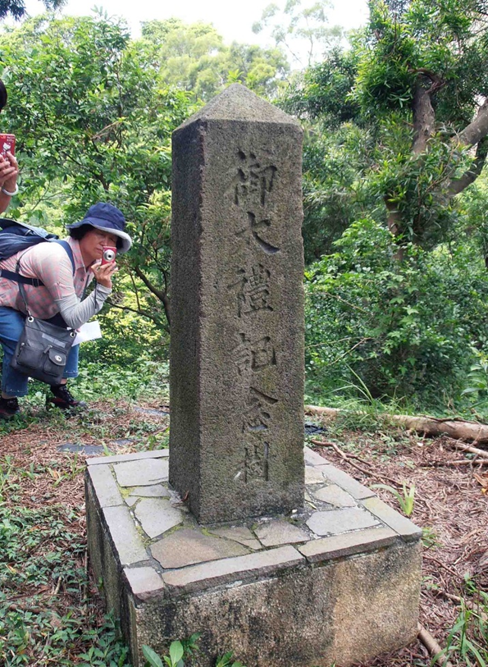 (3) Wenshan Public Assembly Hall: The hall sits on No. 189 of Section 3 of Muzha Road and on the right side of Muzha Elementary School. A Japanese-style bungalow built in 1927 (the 2nd year of Emperor Showa), it has a quaint, modest, and elegant appearance; its diamond-shaped windows can leave quite an impression. The hall originally provided sleeping and residential quarters for successive principals of Muzha Public School (nowadays Muzha Elementary School); it fell into disuse in 1982, when Principal Liu Shanming—its last resident—passed away. After having been abandoned for some time, this housing unit was remodeled as Wenshan Public Assembly Hall thanks to the hard work of locals. The hall was unveiled in October 2002 and has since re-connected with locals in historical and cultural terms. 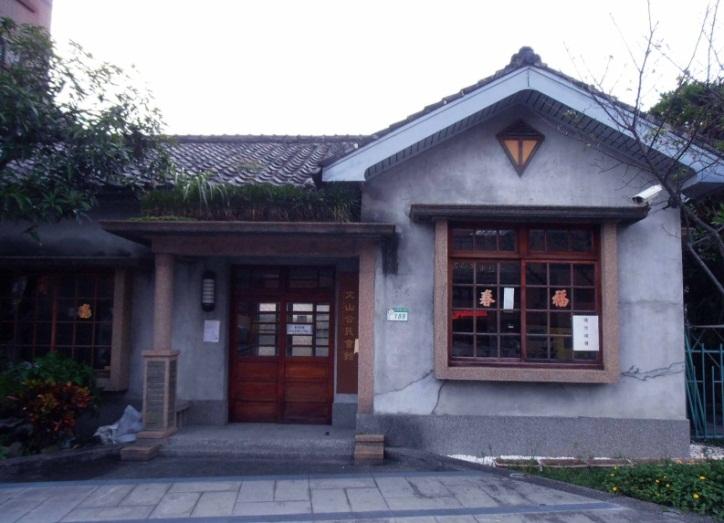 (4) Japanese Police Memorial Tablet: This tablet commemorates six Japanese police officers who were besieged and killed by an anti-Japanese crowd on December 31, 1895. It was erected on Gengliao Hill next to Muxin Road Bridge in August 1897 (the 30th year of the Meiji era). After Muxin Road was developed, with the hill flattened to make way for a gas station, the tablet was moved to Wenshan Park next to Wenshan District Administration Center. The inscription on the monument has since been painted over and rendered illegible. 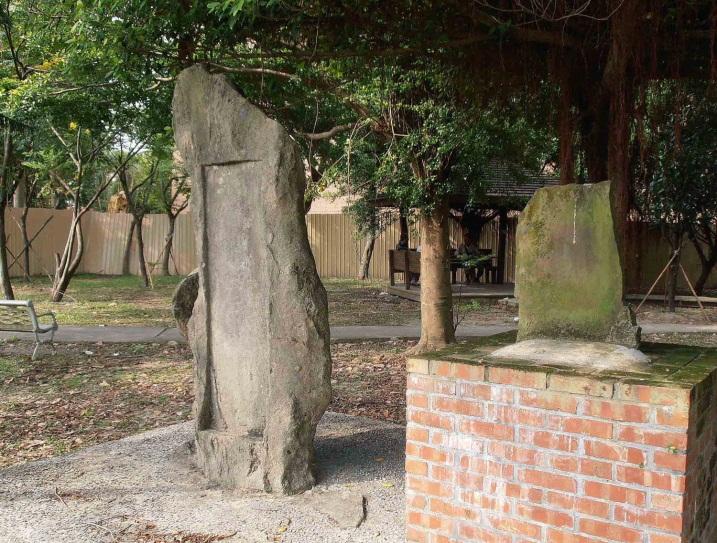 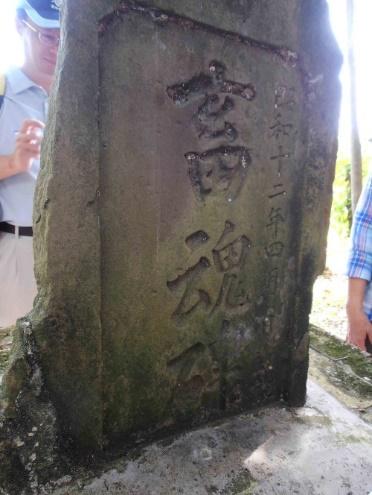 In the picture above: Japanese Police Memorial Tablet (the higher one on the left) and Slaughterhouse Spirit at one corner of Wenshan Park

(5) Slaughterhouse Spirit Tablet: This tablet was erected by Japanese near a slaughterhouse in Alley 14 of Section 1 of the present-day Zhinan Road in April 1937 (the 4th year of the Showa era) for the purposes of comforting the public’s mind and thanking pigs for their sacrifices. The slaughterhouse was built on a paddy field to prevent the howls of pigs being killed from disturbing local residents. As Muzha’s economy grew, the facility was moved away, with the tablet moved to Wenshan Park next to the Wenshan District Office.

(6) Wenshan Church: The church is located in Kaiyun Street; its full name is the Presbyterian Church in Taiwan. In 1875 (the first year of the Guanxu era), Zhang Naihong, a tea farmer from Nanshan District of Muzha, found himself deeply touched by Rev. George Leslie MacKay’s missionary work and became a Christian during his travel through Quchi in Xindian. Zhang would go to church along with his family members and do crowdfunding to build chapels. The church witnessed how its members preached the Gospel through Muzha in the past. In 2019, it was registered as a cultural asset of Taipei City. 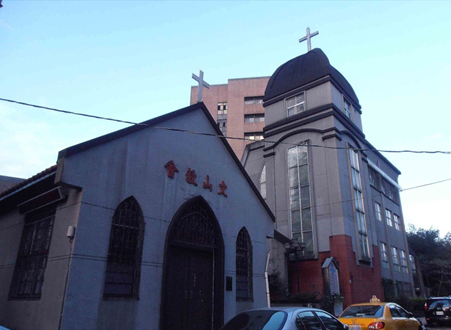 (7) Daonan Bridge: In the old days, boats were the only means of transportation to go from Muzha to Zhinan Temple or Maokong on the opposite side of Jingmei River. Later, Daonan Bridge, a suspension bridge, was built through collective financial support to make it more convenient for the pilgrims of Zhinan Temple to climb to a hill where they could worship Lu Dongbing (an immortal in folk tales), and to facilitate traffic to and from both sides of the river. In 1935 (the 10th year of the Showa era), the bridge was reconstructed as a more attractive arch reinforced-concrete bridge. As local traffic increased and a need was established to improve boat traffic in Jingmei River, it was rebuilt as a straight type in 1974, with pedestrian and bicycle paths furnished on its both sides, and has since been around in this format.